An Alternative View of Ark Cartoonism 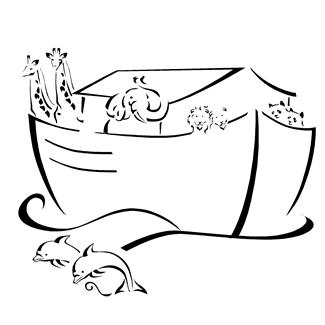 http://creation.com/cartoon-ark): "The cartoonification of Noah’s Ark: How such ‘delightful depictions’ downplay the Deluge – and Christianity." The author’s thesis is that the Ark is belittled and ridiculed by the cartoons that one sees everywhere in drawings, toys and craft objects. This negative view of Ark cartoonism is not a new idea. Dan Lietha expressed much the same opinion back in 2007.

But I’ve not been of the same mind as these gentlemen on this subject. In my ICC2008 paper, "A Review of the Search for Noah’s Ark" (

http://www.creationsixdays.net/ICC6-41.pdf), I expressed the idea (pp. 497─498) that perhaps all this cartoon advertising of the Ark served a positive purpose in keeping the memory of the Flood story alive in our culture.

I do not think that Robinson’s comparison of the Ark with the Titanic is valid. He is right that we do not cartoonize the Titanic. What kind of ghoul would do that? The Titanic represents a dark and tragic event in history. By contrast, the Ark represents God’s purpose in saving 8 people and all those animals to repopulate the world after the Flood. This is very different.

(Inserted comment as of April 29, 2017: A sharp-eyed reader of my newsletter pointed out that, in fact, Robinson is wrong. You can google up a whole lot of Titanic cartoons, something I should have done before writing the paragraph above. So there is egg on my face, too. Apparently not even the Titanic escapes our urge to cartoonize. Presumably the cartoonists are ghouls.)

Besides, in the USA we most certainly cartoonize just about everything else. Nothing is sacred. It’s a beloved aspect of our culture. I still have a yellowed cartoon posted on my filing cabinet, dating from Horowitz’ death in 1989. It’s the angel guarding the gates of heaven, telling a lesser angel (who has a sort of harp in his hand): "Quick! Horowitz is coming! Get rid of that harp, and bring out the Steinway!" Do I get involved with theology on that one? No. As a harpist, I laugh every time I look at it.

Furthermore, we all understand that a cartoon represents something that is real. We do not doubt that those politicians in the newspaper cartoons are real people.

Indeed, these many Ark cartoons offer an open opportunity to witness about the real Ark of long ago, and the Flood story. Let us not be so prim and disaproving that we miss this aspect of the cartoons. Plus, I guarantee that the Ark cartoons will not go away. We might as well settle in and accept those Ark cartoons, and make the most of them, whatever we choose to think of them.

There is perhaps an irony in that those cartoonists are promoting the Ark for us, even though they do not necessarily believe it ever existed!