Harran is known to Bible believers as the place where Abraham paused between Ur of the Chaldees, where his journey started, and Canaan, the ultimate destination to which God had called him. Abraham left Harran at 75 years old, after his father Terah, died there. Harran was a center of worship of the moon god Sin. 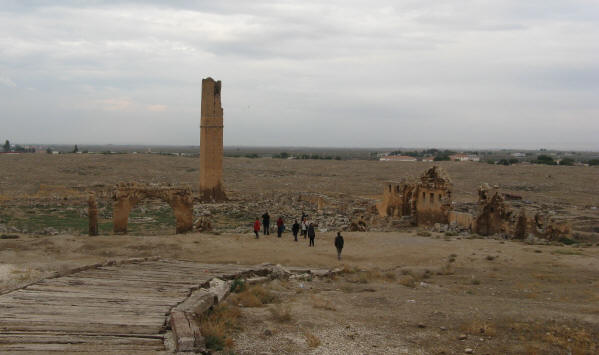 At left is a view of ruins of the Grand Mosque, and the remains of the ancient university astronomers' tower (sometimes mistakenly claimed to be a minaret of the mosque).  Some scholars believe that ruins of the moon god's temple of Abraham's day lie beneath the mosque. I question this, but my reasons for saying this will have to wait for another day until I do more research. Ancient Harran is largely unexcavated and its earliest levels are unknown. Judging by the huge area that is literally littered with remnants of ancient stone constructions, there is a lot of history to be uncovered here.

This photo shows some of the ruins of stoneworks that cover the area. It is clear that ancient Harran must have been a major city in its day.

These stones are on a hill near the mosque and university ruins shown above. We might speculate that the earliest levels of Harran would be in this mound.

This photo was shot towards the famous beehive houses, with the mosque ruins behind me. 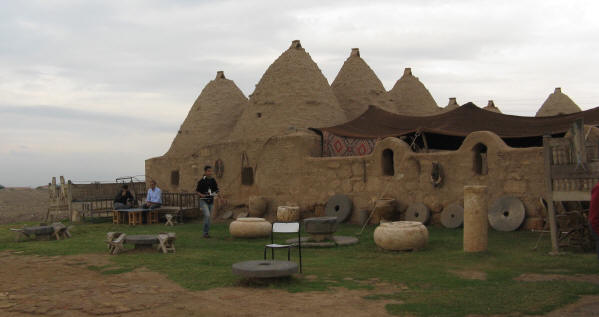 The beehive houses of Harran are perhaps half a mile away from the stone ruins shown above. Formerly, these were private homes, but nowadays they are kept up largely for tourists. Modern Harran is a couple of km away.

It is claimed that these beehive houses were very comfortable, cool in summer and warm in winter. One wonders why they abandoned them for modern houses!

Below left, we did some shopping . I bought a deep lavender-colored square of cotton that is a traditional color of Harran, as the charming salesman assured me. (He is shown below right modeling a men's traditional piece of headgear.) Unfortunately I had flown in from the US with only hand luggage and had no extra space. The price of those lavender scarves was very good, and I would have liked to buy one for everybody I know back home. I guess my friends and relatives will have to go to Harran to get their own scarves! 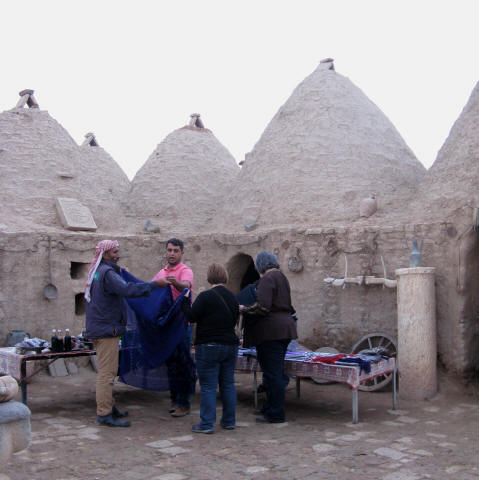 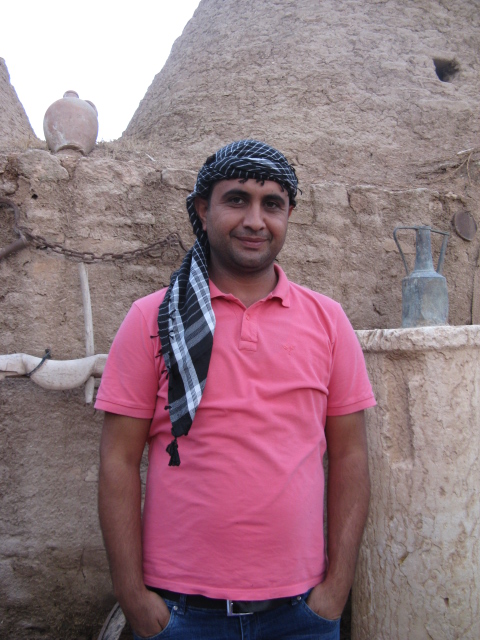 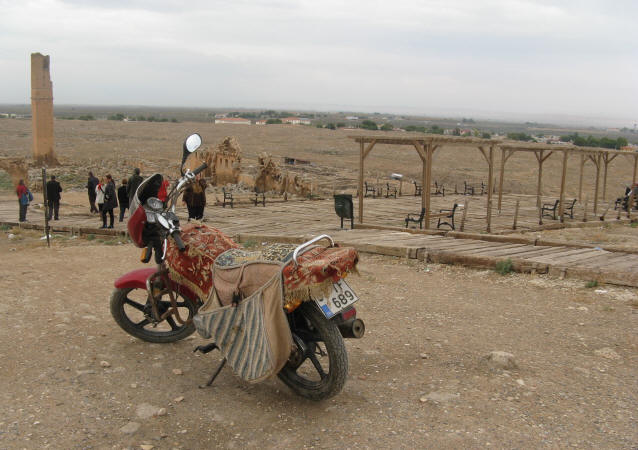 This parked motorcycle caught my eye. I especially liked the rug that covered it, a nice decorative touch. In the distance are the ruins of the mosque and tower. I'm not sure in which direction this photo was shot; however, if you look in the right direction (south), you can see the low mountains of Syria in the distance. Harran is only 16 km from the Syrian border.

Things were calm while we were here, happily. But it was less than a month later that the Turks shot down a Russian jet somewhat to the west of here on the Syrian side.