At the end of October, 2015, I visited several ancient sites in Turkey along with a small group of archaeologists. Göbekli Tepe, the prehistoric site of amazing stone T-shaped pillars, was at the top of our list to visit. Although digging had ceased in mid October and the site was officially closed for the season, we were able to have a private tour arranged for us. We are indebted to those who made this possible. Our guide was acting dig director, Lee Clare, of the German Archaeological Institute in Berlin (Klaus Schmidt, long-time site director, died suddenly in August of 2014 and Clare was appointed to take his place). This site is in the south of Turkey, just north of the Harran plain.

(Left) Three members of our group, accompanied by two tail-wagging locals, are shown at left in the arrival area. Behind them are steps that lead up to the archaeological site some distance away. "Göbekli Tepe" is translated "potbelly hill" because of the shape of the hill.

Below, the owner of the land on which Göbekli Tepe lies showed up to greet us. That's me in the picture with him.

At left is one of the great T pillars at Göbekli Tepe, engraved with animal depictions, and below is a group of the pillars. The dig area now has a temporary cover to prevent erosion by the elements; there are plans to erect a permanent cover in 2016. I regret not being able to visit this site before this temporary cover was erected, because the present cover rather impedes visibility. 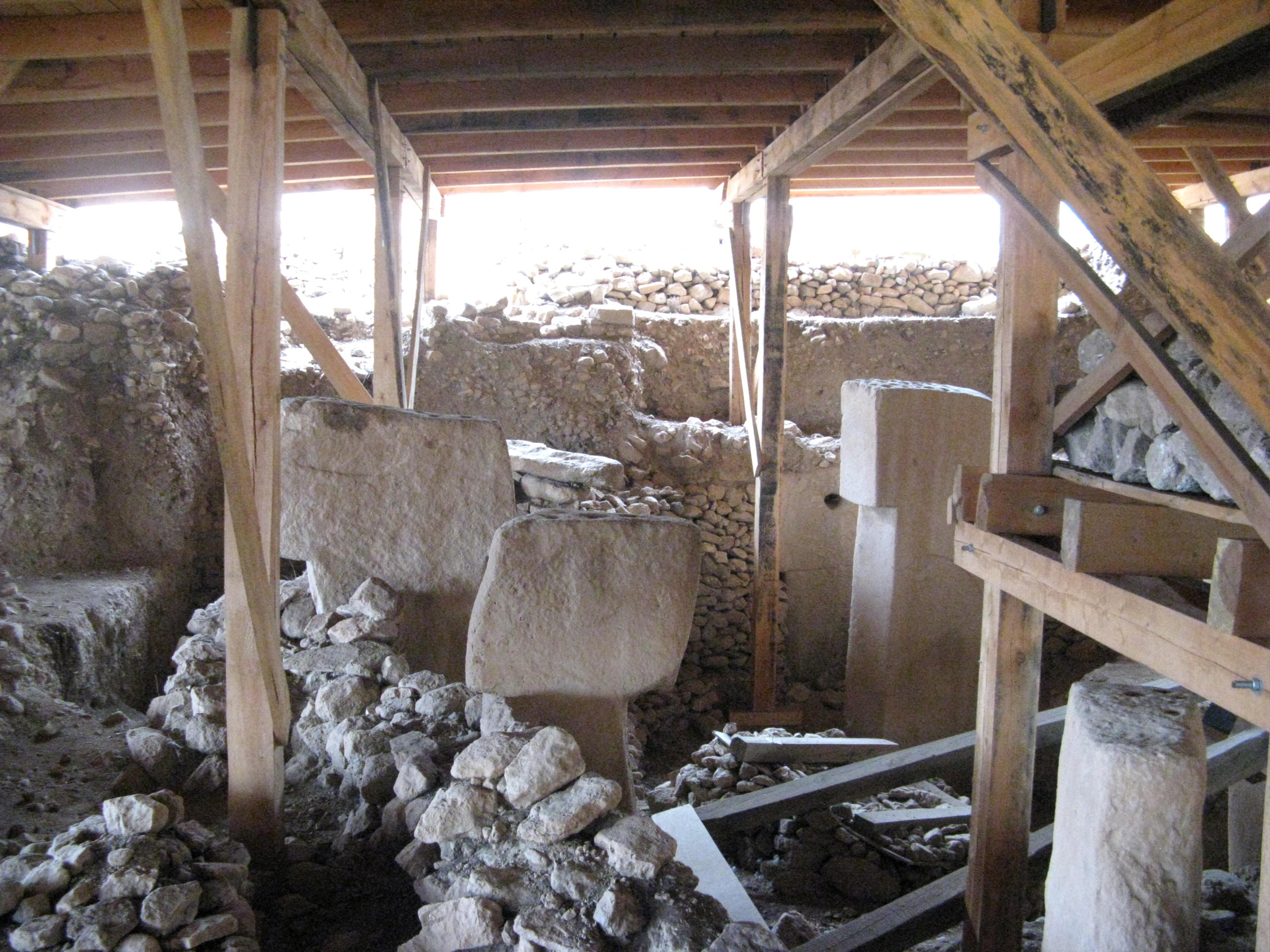 At left, members of our group view the dig from the visitors' walkway. 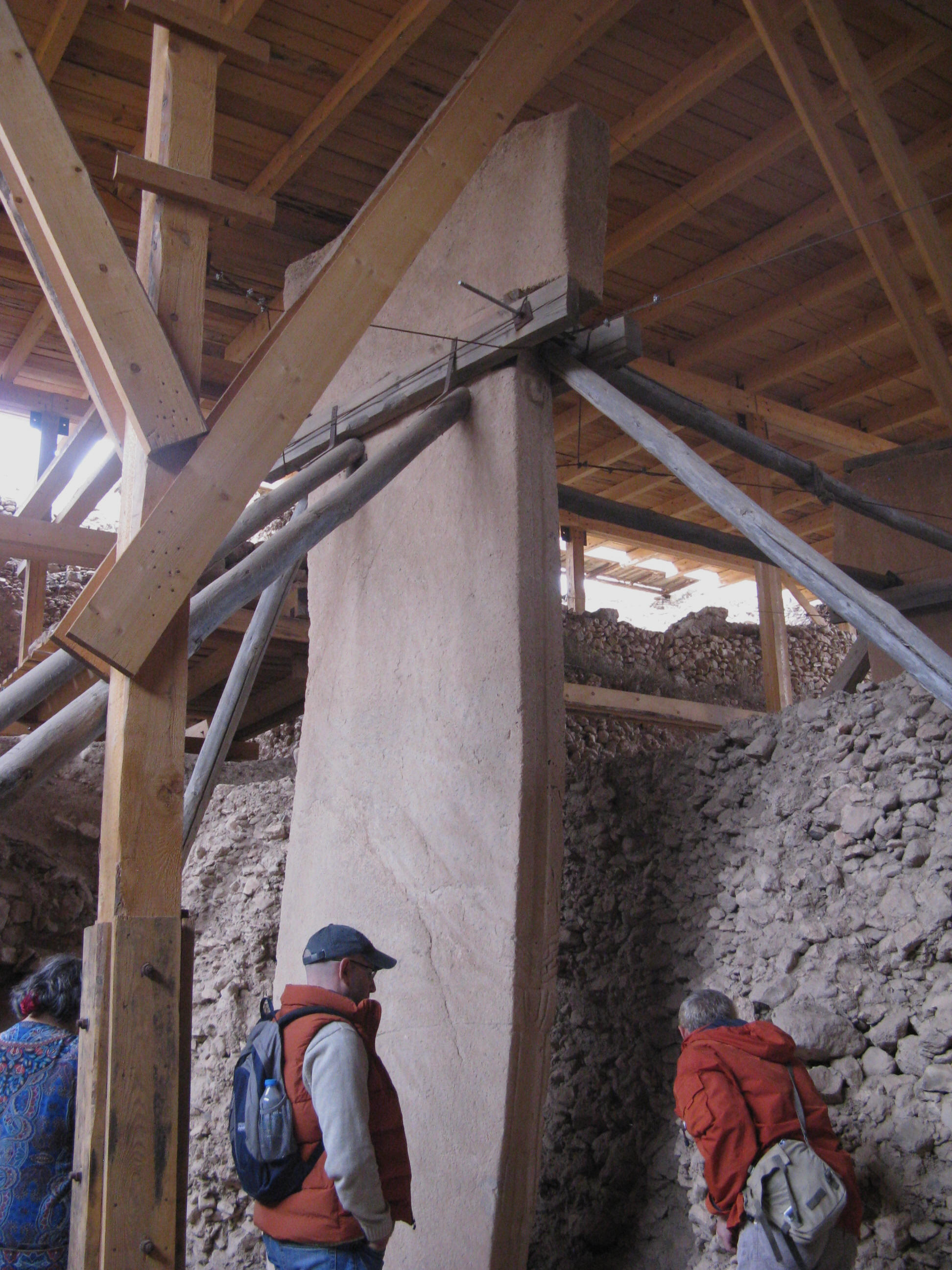 At left is one of the two tallest pillars in the center of one area; its height can be judged by the man standing in front of it. Below, another view of the pillars amid the stone walls. 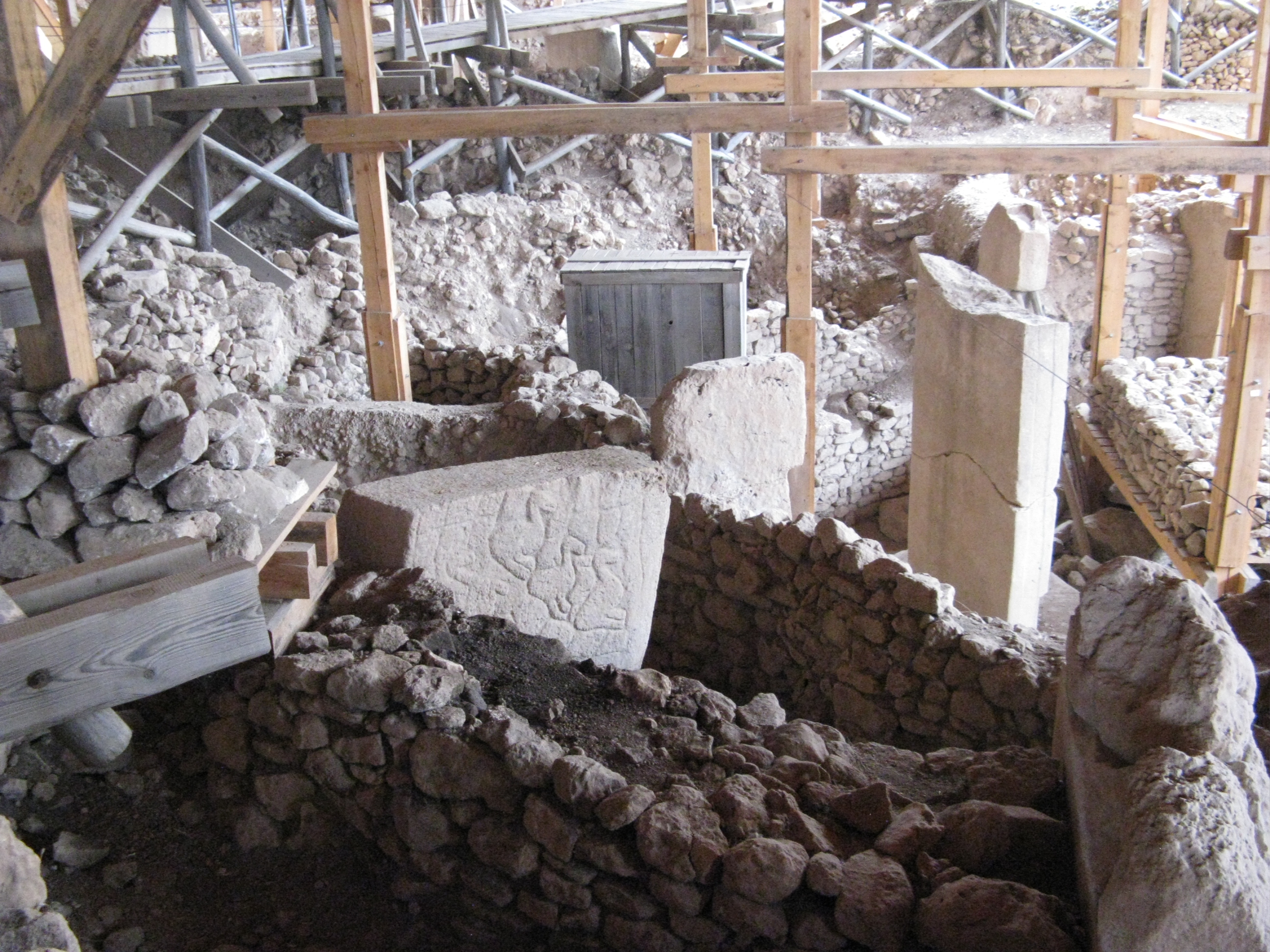 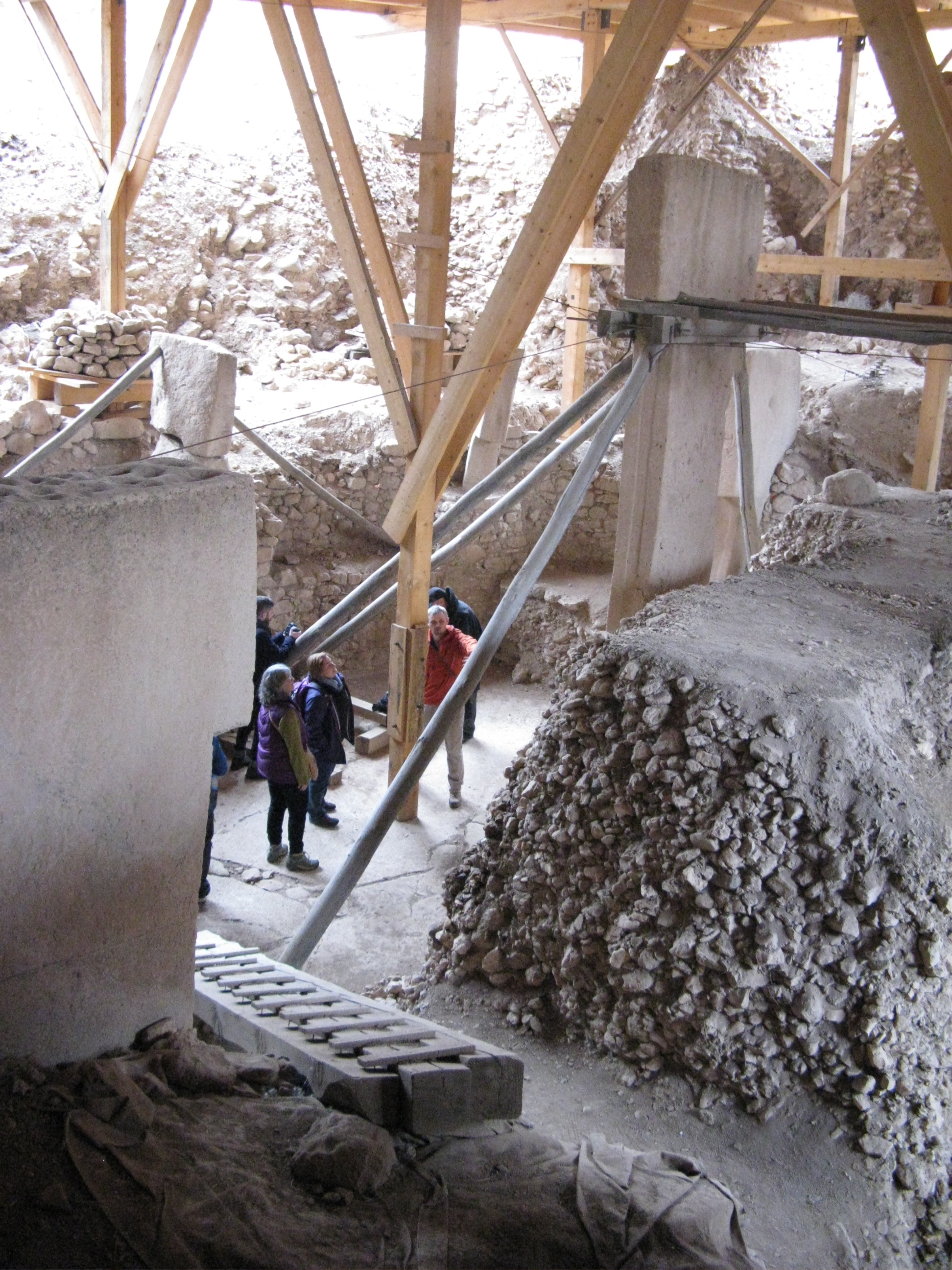 (Left) We were allowed to climb down a rather risky ladder (you can see a bit of it at the lower left) to the floor level, under the watchful eye of the acting dig director, Lee Clare (in red jacket). Looking up at those pillars from the floor made us realize just how tall they were.

Below, a distant view of the new excavations. We got special privileges and were taken over to get a closer look at this area, but only under strict instructions not to take any pictures and not to pick up anything off the ground. It is estimated that only about 5% of the Göbekli Tepe site has been excavated. Remote sensing indicates that there are over 20 of the circular areas with pillars. Excavation will go on for many years. 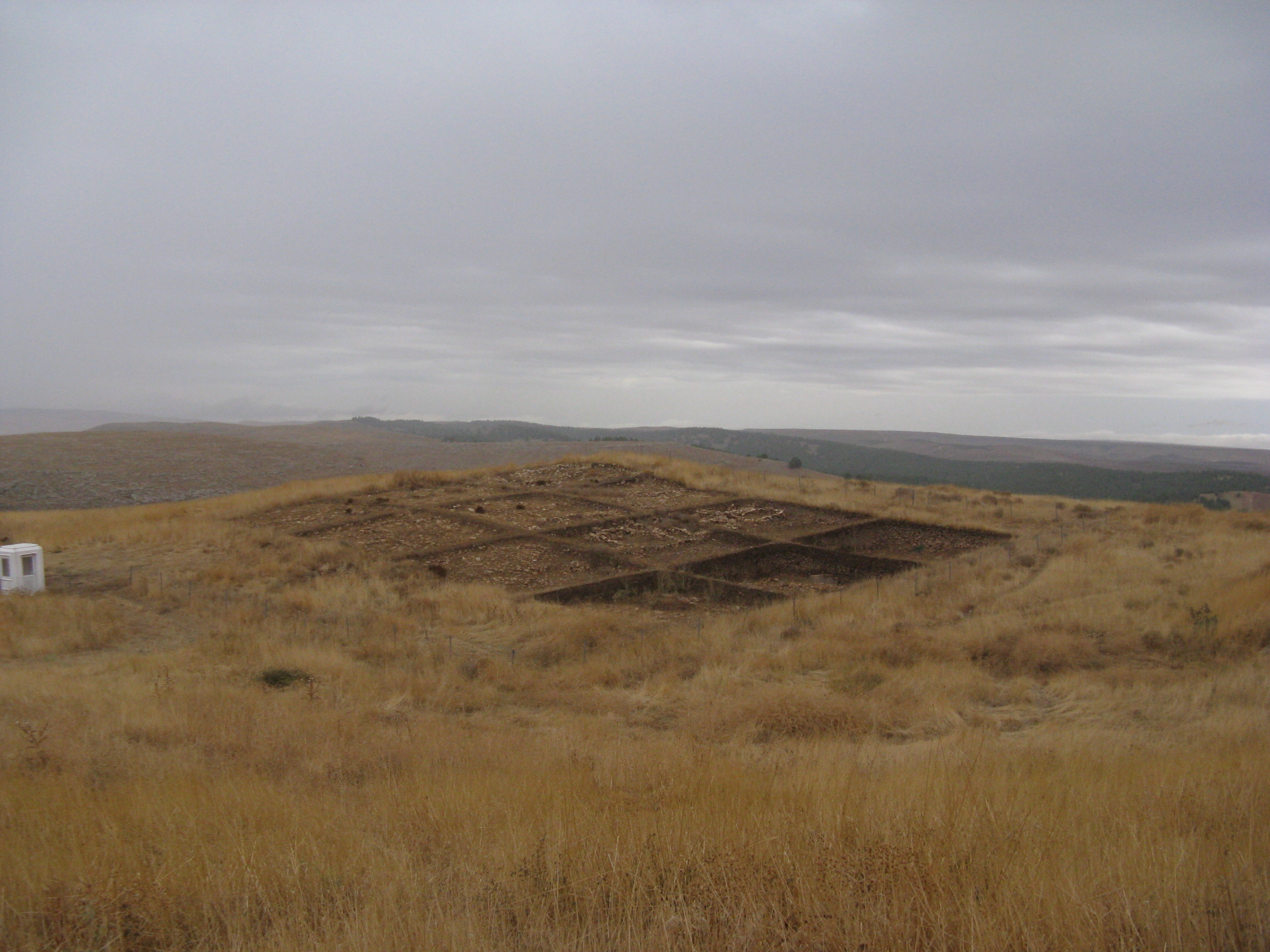 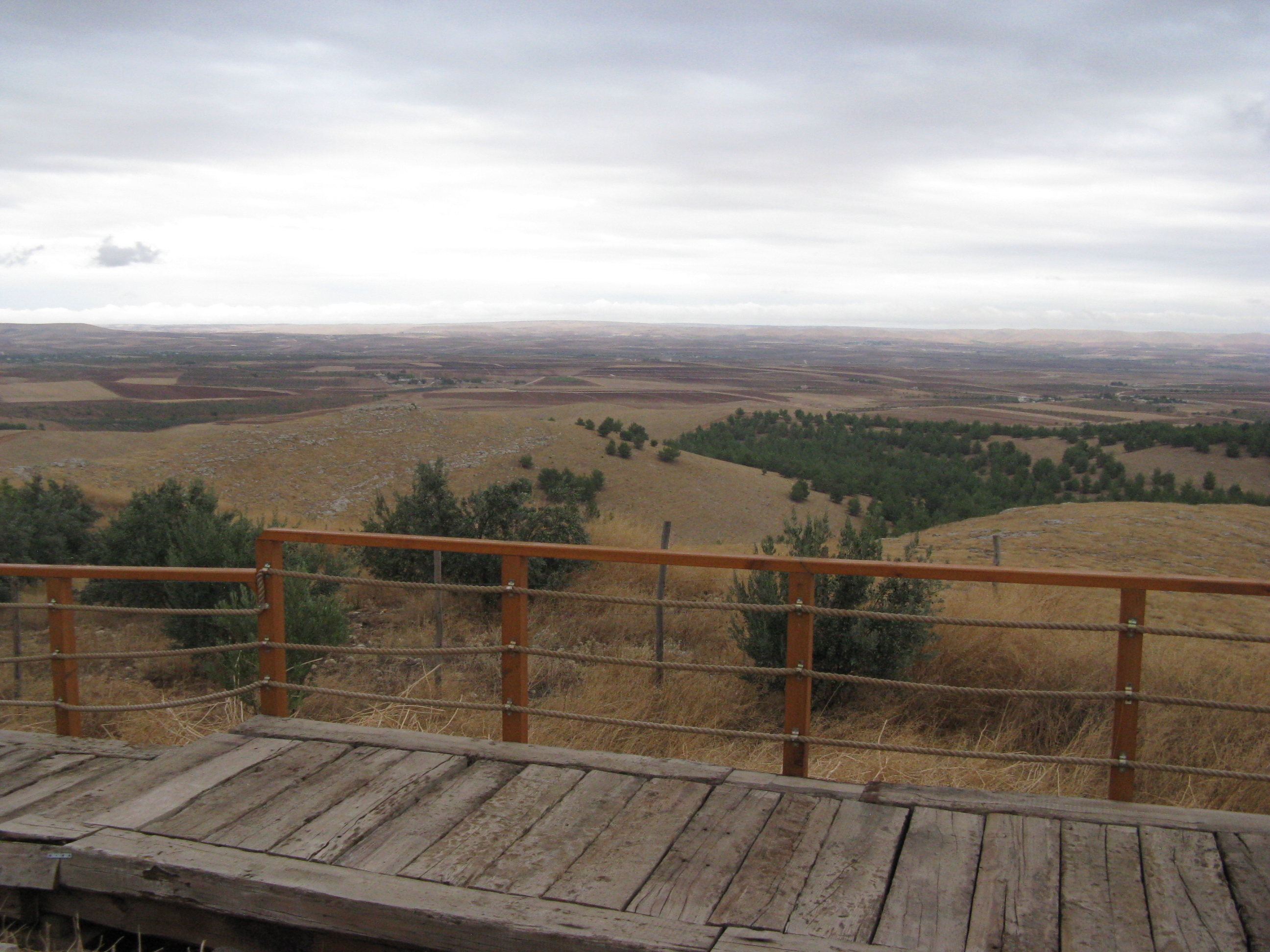 At left, a view of the countryside from the top of the hill.

Below, we took a look at a rock-cut feature at the bottom of the hill before starting the climb. It is believed to be a cistern. Water would have been a major concern for the builders at Göbekli Tepe, because there are no water sources on the hill. 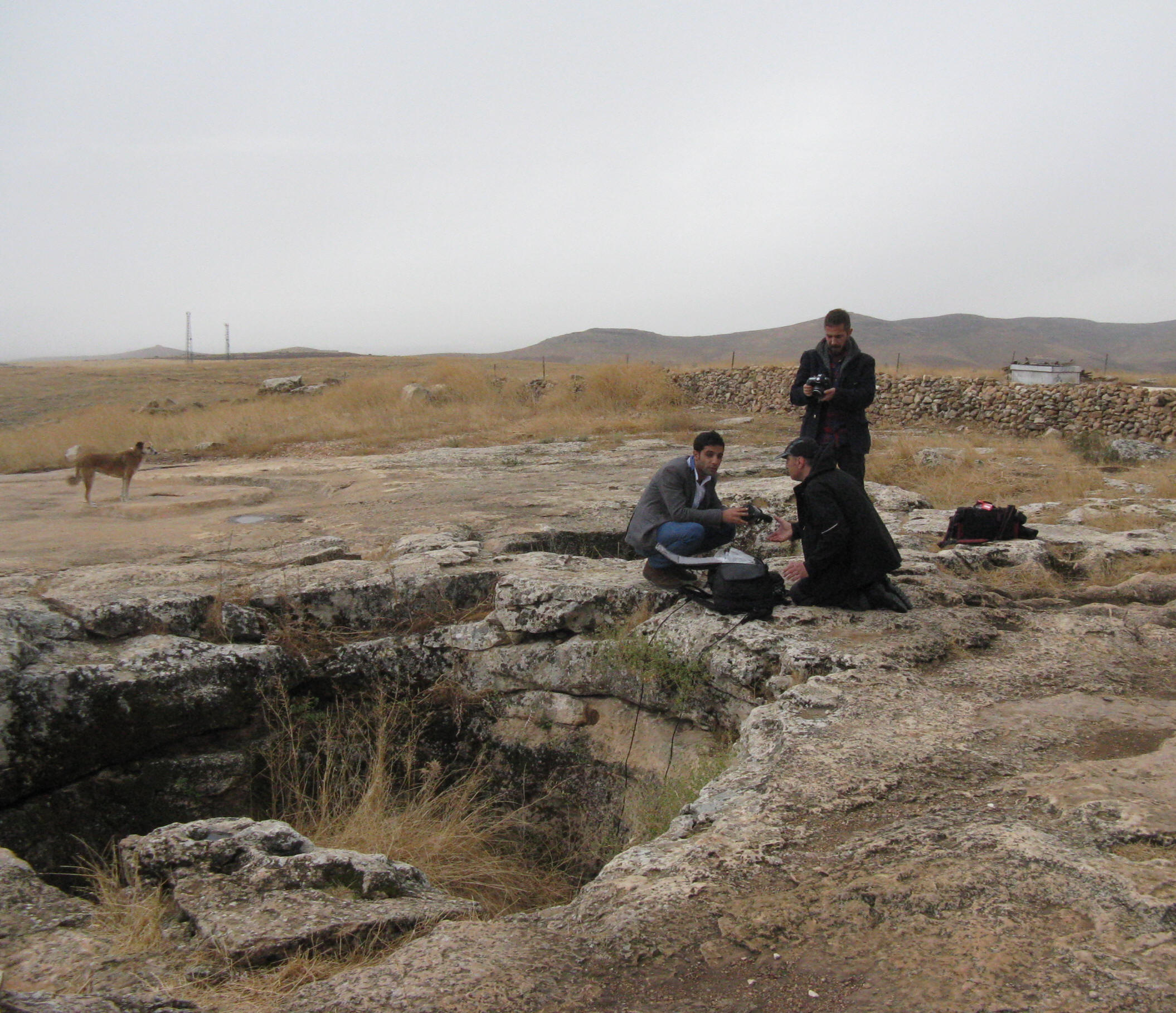